When replacing or newly installing a door lock, there are measurements you need to know before you place an order on your lock. 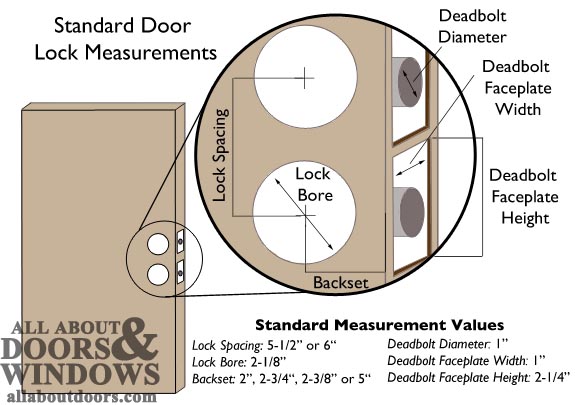 Lock Bore The diameter of the hole for the lock body. The standard bore is 2-1/8”. Many older doors had bores that were been smaller. Most of the current locks require the standard 2-1/8” bore. If one wants to replace their locks on doors that have smaller diameter holes there are 2 options. First, doors can usually be re-drilled. Secondly, there are a few lock companies, like Weiser, that make locks to fit the smaller bore.

Backset The distance from the edge of the door to the center of the lock bore. Two standard backsets are 2-3/8” and 2-3/4”. Other backsets include 2”, used by National and Lori Lock, and 5” used by Weiser, Weslock, Kwikset and others. There are also extensions for some brands, like Schlage, that can extend the latch enough to have the lock located in the center of the door. When replacing locks the latch backset needs to match the holes bored in the door.

Lock Spacing The distance between two locks. When boring deadbolt locks in a door, there are two standards for spacing between the bottom lock and the deadbolt. The two most common are 5-1/2” and 6” from the centers of the two holes. There are other combinations of spacing which are used on specialty locks, however. When adding a deadbolt lock, your best choice would be one of standard measurement.